This weekend at The Beacon

This weekend we are pleased to be hosting The Black Huts Festival – a celebration of writing, music & film. Taking place over the course of two days (Friday-Saturday), we’re in for a real treat of cultural and creative exchange. Our doors are open, as is the bar!

James Kelman / John Healy followed by a Q&A session
£8.00 / £6.00 concessions
James Kelman, seminal and pivotal Glaswegian writer (How Late It Was How Late, The Burn, Kieron Smith, Boy), reads short stories from A Lean Third (Tangerine Press) and from a novel, alongside a return reading by John Healy who reads from his new – as yet unpublished – work, The Metal Mountain, a novel about an Irish family’s survival in a brutal North London 60 years ago.

Carlyle Reedy / Pete Brown
£8.00 / £6.00 concessions
Virginia-born painter and poet Carlyle Reedy possesses an exploratory spirit in writing for performance, collage and print. Her performances in the ’60s and ’70s, in company of writers such as Pete Brown, Spike Hawkins, Tom Raworth and Lee Harwood were extremely influential for younger generations of writers and visual artists.
Pete Brown was the first poet to read at Morden Tower on Bloomsday 1964, in Newcastle upon Tyne. He performed Kurt Schwitters’ poetry at Wholly Communion at the Royal Albert Hall in 1965. He met Ginger Baker and Jack Bruce at the Marquee Club in 1966, and wrote lyrics to Wrapping Paper. Then Brown wrote many Cream lyrics with Jack Bruce, and many of the songs on Bruce’s final album, Silver Rails, and the earlier Songs for a Tailor.

Jonathan Coe / Elle Osborne /Brian Catling
£8.00 / £6.00 concessions
Halloween Performance
Jonathan Coe is the author of many novels including Expo 58, The House of Sleep and The Rotters’ Club. He also wrote Like A Fiery Elephant, the award-winning biography of experimental writer B S
Johnson. Tonight he will be presenting his new book Number 11, a collection of five macabre novellas which provide a chilling portrait of austerity-era Britain. After Jonathan Coe’s reading, he will be in conversation with David Quantick.
Elle Osborne is a fiddle-singer, soundartist, and bare-knuckle writer. Inspired by the language and imagery of English folksongs, she performs her own songs as well as re-interpretations of the traditional songs she was raised amongst, on the North Sea coast of Lincolnshire.
Brian Catling is a poet, sculptor, painter, and performance artist. Prepare to lose yourself in the heady, mythical expanse of The Vorrh, that Alan Moore has called “a phosphorescent masterpiece” and “the current century’s first landmark work of fantasy.”

Sunday Clubhouse Lunch 12-4. The start of the new menu for November, kicking off with Gin & Juniper roast pork or Quinoa stuffed squash. Both served with rosemary roast potatoes, sauteed kale with leeks & gravy. Plus, a free glass of mulled cider! 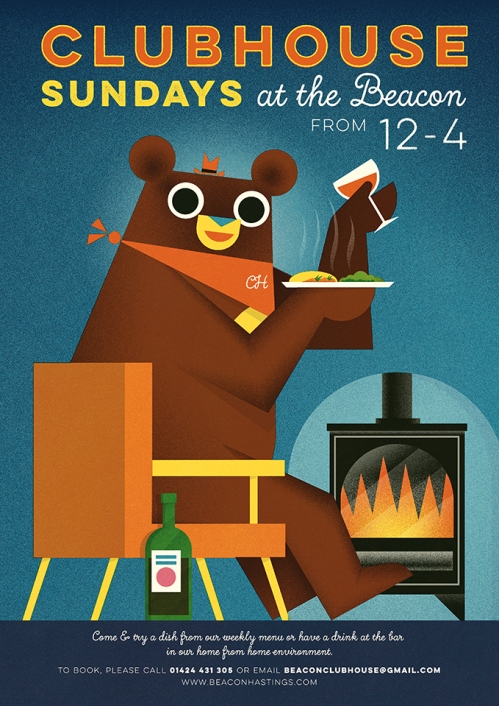 For tickets or to book please call us on 01424 431 305 or email beaconclubhouse@gmail.com (Sunday Lunch bookings) info@beaconhastings.com (Black Huts tickets)

For a the full run down of the Black Huts festival, visit our events page here

This entry was posted in Uncategorized. Bookmark the permalink.